Tonight (8/18) is the Leo new moon ♌️🌙 (10:41 pm EDT) which finalizes our initiation into the Solar Masculine Christ…the male principle of the Hieros Gamos union needed to embody the Solar Logos, the pure (crystal-christed) light that emanates from the Great Central Sun.  For this reason, it is an important week for completions, anointment/ordination ceremonies, crownings, and the like as we anchor the GOD aspect of our Creator consciousness in preparation for Virgo Sun (8/22) and the next stage of Solar Feminine Christess embodiments.

Meanwhile, we (as a collective) continue to move thru the rainbow bridge which grows in strength and numbers until the 12/21 solstice which marks the one-year completion point of this (nirvanic) Solar Heart gateway that opened (ethereally) during the December solstice of 2019, anchored in the physical at the June solstice 2020, activated thru the 8:8 gateway and completes its full-blown manifestation in December of this year.

And as we each, individually make our way over the rainbow bridge to “meet our maker”, our Creator/Source Self, we officially acquire our Key to the Kingdom.  But what does that mean?

Rewind ⏪ to the stroke of midnight on 8/8. Christ appeared with an offering, requesting my consent to officially receive what I later found out to be “The Key”.  He wore a deep royal purple robe with a glowing golden Sun surrounded with golden fire on his chest…in the place where the Sacred Heart used to be. The contrast in colors (gold & purple) was striking enough to seem significant…I presume to symbolize the merger of divine (violet) & physical (gold) alchemy⇾ Master Merlin style. 🔮✨ 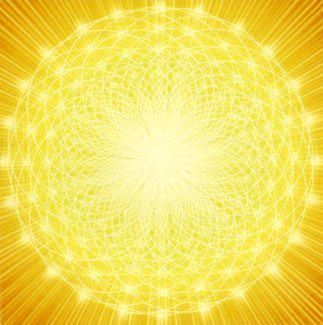 It wasn’t the first time I noticed this Golden Sun replacing the Sacred Heart.  On the night of the June solstice, the (archetype of) Christ had also appeared…this time in white…for a ceremonial ordination in which I was shown what he called a “solar flash” that amounted to a giant SUNBURST of crystalline prismatic light that descended from the Sun, down his column of light, landing in his chest & exploding from within his Heart.

I was shown that once the (Diamond) Solar Heart fully ignites, the threefold flame (of the Holy Spirit) merges into ONE blazing central Sun. (Likely explains the ongoing heart & body fire since the Lion’s Gate opened on 7/26.) At this point the separate (power, wisdom, love) plumes of learning/initiations are complete and they return to (merge with) their original state of union with Creator, reconnected to/with the chain of nested Suns (of GOD) that step down fractally in power…to where we essentially become a solar gateway unto ourselves.

He explained that this Solar Heart represents the Sun of GOD in the Heart of Man…ergo⇾ Sun of Man…and that it replaces the Sacred Heart which is actually the “wounded heart”.  That same night I was also presented with the Golden Scepter…a ceremonial emblem of sovereignty yes, but in this case (Gold) signifying the masculine (Rod) structure of the Christed union…as well as the Hieros Gamos/Royal Crown replete with 3 jewels/gemstones (ruby, emerald, sapphire).  During the ordination I was told that this Royal (Gold) Crown replaces the Crown of Thorns (mental suffering), the same way the Diamond (Solar) Heart replaces the Heart of Thorns (emotional suffering)…together signifying the official end of the crucifixion journey and the indoctrination into the Office of the Christ. 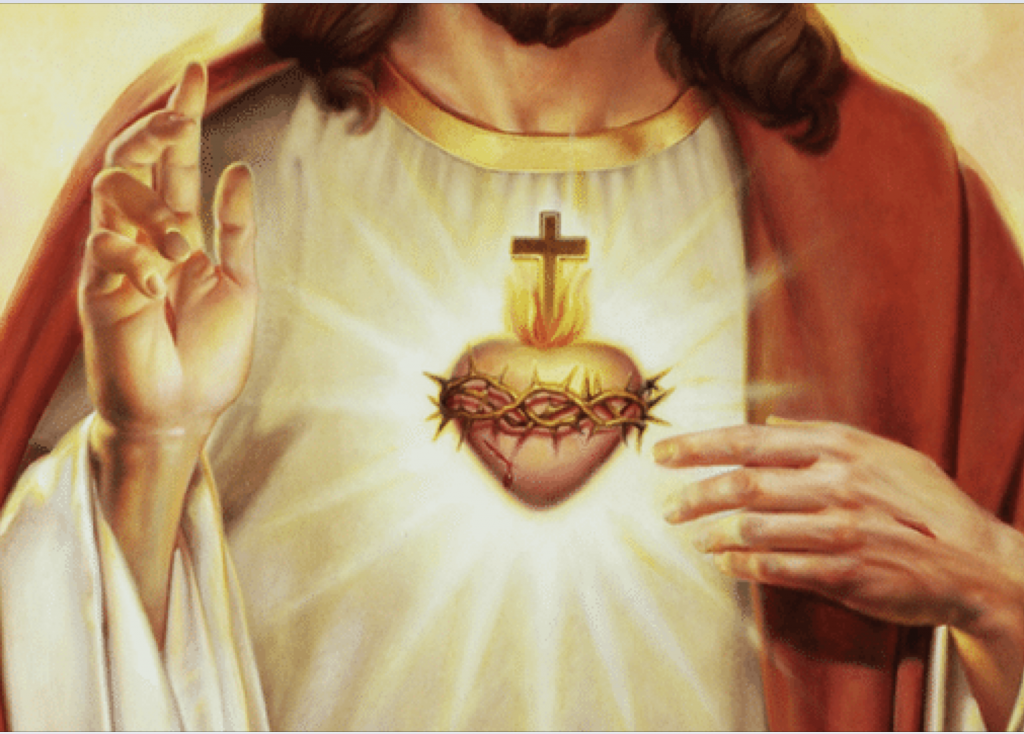 NOTE:  In case it speaks to anyone, that night I also learned of the symbolism held in the infamous hand gesture in so many depictions of Jesus. He clarified (for the first time) that the two extended fingers represent the two-fold (divine & human) nature of a Christ…and that the three other fingers (thumb, ring & pinky) represent the threefold aspect of GOD consciousness, aka the Holy Trinity.  This may be old news to some of you but I was grateful for the clarity…the relevance of this revelation felt like a timely puzzle piece.

Unbeknownst to me at the time, that was the last I would see of the Sacred Heart, which was always prominently displayed in any vision or apparition over the last 15 years.  But from the June solstice forward, every projection of Christ now contains the Diamond Sun/Solar Heart symbol denoting that 1) suffering is finally a thing of the past (age), as well as 2) a representation of our collective embodiment of the Original (Diamond Sun) architecture for all of Creation. Which…if you recall from the report…acts as a KEY (to the universe) because it is the same blueprint/cosmic pattern that all logos structures share in this (nested/fractal) universe. 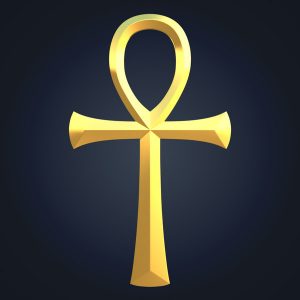 Fast Forward ⏩ back to 8/8 when I was surprised to see that the Key I was given that night was, in fact, an ankh.  Surprised because ALL the distortion from the ancient Egyptian timelines has corrupted its symbolism with false programming…to be given this talisman in such a sacred ceremony seems to signify the collapse of those (false) timelines and a return to their inception point. 🤞🏼

NOTE: For those unfamiliar, the mind control programming for patriarchal domination and the enslavement of Earth & humanity originated in Egypt.

According to my Sources, the negative off-world forces hijacked the Egypt stargate, intentionally utilizing its power…including the pyramids which used to be massive power generators of the Cosmic (Mother/Heart) Life Force…to achieve their nefarious (inorganic timeline) agenda.  This stargate is described as the planet’s “astral command center” which is supposed to usher 4th dimensional (Heart chakra) life force energy into our planet but has been blocked/thwarted.

The ankh…which is arguably the most recognizable symbol of ancient Egypt…is most commonly known as “the Key of Life” or “Key of the Nile” (denoting life) and represents eternal life.

I also read somewhere that it is said to be the first, or the “original cross” which, to me, is unavoidably reminiscent of the female sign ♀…which (ironically) also looks like a key.

The ankh is most often seen in the hands of important Egyptian figures (pharaohs, kings & queens, gods & goddesses), so as to “preserve their immortality.”

Which dovetails beautifully with what Christ said when he handed me the ankh:

Receiving the key to the kingdom signifies your return to and from the afterlife.

In other words, it is the merger of both life & death.

The key is symbolic for the ‘unlocking of heaven’s gates’, only you are achieving this state of Heaven in form.

He went on to say that an initiate receives the Key after all initiations into Christhood have been successfully completed, when we have “earned our wings”, so to speak…finally free to fly the (3D) coup.  From report:

This means above all else that you are free to become your authentic Self now…that you have triumphed over the false agenda through initiation after initiation, to arrive at Creator Consciousness.

From this, you are granted the Keys to the Kingdom where you are able to rewrite your entire body and life to its original coordinates, which means many anticipated things.

Once the Key “is in our possession” we have access to what he called Worlds within Worlds…the interdimensional gateways that lead us to and from all the nested realms/spheres of existence within the universes of Creation that are all superimposed over each other in the same space, separated by time(lines).

This is what is meant by “the Kingdom”, that we literally have access to the multiverse, to all (dimensions of reality) right from within our earthly abode, our internal dwelling space…that which is no longer contingent upon the unfolding of time, but upon command (resonance).  In other words, the stargate that is our Solar Heart serves as a time-gate portal, a gateway that literally delivers us to the other side, the afterlife…aka⇾ beyond the (4D) construct of time.

NOTE: This is why we have been working SO hard to break through the false programming to dismantle the artificial (astral) ascension matrix, to seal the underworld and to clear the grids of all the Satanic implants from the Luciferian Order.  (Satanism is akin to the “ground crew” of the off-world aliens who created the whole agenda.)

Christ compared the Worlds within Worlds concept to what is referenced in the Bible as the “many mansions” (John 14:2) explaining that it (quantumly) represents the many dimensions of the multidimensional universe, separated by frequency.

The Key to the universe offers us the ability to move beyond the physical realm, to embrace the full scope of our multidimensional reality as a multidimensional being of the universe……via our True star (solar) nature.  This is the state by which we can transcend the physical laws (causal world) because we have mastered them in our human incarnation experience…where we can rise above & beyond the gravitational pull of the lower realms (separation, shadow & suffering) while continuing to exist alongside of them.  Aka⇾ Divine Providence (immunity), which enables us to “return (from death) to create new worlds among the living.”

My Arcturian aspects are actually stepping forth with something to add here:

The Key to the Kingdom offers you the capacity of the universe from within your own fractal YOUniverse.

You’re reconnected to and nested within the Original structure of Creation which means much more than immunity, it means omnipotence.

Omnipotence is the ultimate authority of GOD, the capacity to create from the Worlds within Worlds and it is gifted to those who have achieved the immortal state of consciousness, from within the form, from within existence.

This foretells of the scope of possibility that awaits one on the ‘other side’ of death.  Having faced death and transcended the illusion of its false power, while incarnated in a body, is the greatest achievement of (hu)man.

This is the window opening to you now, for you have moved beyond the shadow (astral) world to arrive at the True gates of Heaven, the proverbial white (Christ) light at the end of the tunnel (ascension column)⇾ the Great Central Sun, which exists right within your Temple. 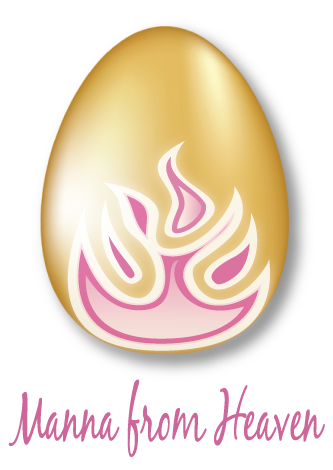